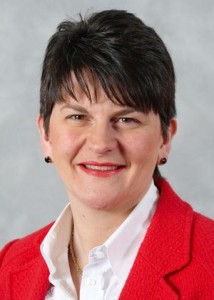 I am so pleased that I have written a wee blog about Arlene.

When Arlene was picked as the NI Assembly’s first Environment Minister, she would have known that I was invited by the Press Association to critique all the main parties’ election manifestos [manifesti?] and that column was in a lot of different NI newspapers.

I can’t remember now who was the best in 2005 – Alliance? SDLP? but I KNOW Sinn Fein and the DUP were the worst. [How have things changed this election year?]

By coincidence, we at Baglady had picked Enniskillen to film the first of our 16 pieces on plastic bags, environment etc, round Northern Ireland.* When Arlene got the top job, we invited her to support us any way she could; and her very positive media release reached us in time for day 2’s filming at Trillick, where Barry McElduff leapt in to endorse Arlene’s message. To great joy outside McCarney’s shop. The whole village joined in and plastic bag use plummeted.

After that, every time I met Arlene, in bags or out, she was always really friendly, practical and, I felt, straight. She launched the NEEDabag 2 film premiere at the QFT and starred with Baglady in the Intro film. What Arlene said that day was really good. Check NEEDabag 2007 films on our website or Yoohootube. Or I’ll quote it again in a future blog. It’s very good and it’s about all of US in NI.

Sadly, Arlene wasn’t Environment Minister for long. In about a year she got moved on, handing over to the soon-to-be-world-famous Sammy Wilson, who quickly made way for the 3rd, Edwin Poots. A lot of people are saying Poots is getting the message: Envirogreen is not a choice, it’s vital; AND it can save money and create jobs. A message a lot of us have been bangin on about for some time.

Now Arlene’s joined us, 3 out of 3 Northern Ireland Environment Ministers have pledged our simple pledge, to give up one thing, and take up one thing, to live ASAP [and you ALL know what that means don’t you? !!]

At last we can show our brilliance to the world.

Just add your address below to receive a monthly digest of the latest news from Baglady Productions. [mc4wp-form]